After almost 2 years of being ran by a tyrannical Captain, The Alabama Department of Corrections has announced the appointment of a new warden at the Montgomery Women’s Facility. 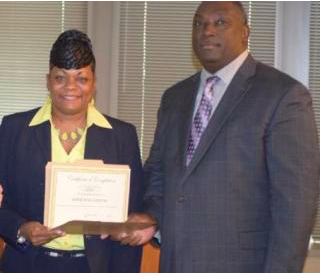 Adrienne Givens has been appointed to the warden position of the facility, located behind Kilby men’s prison, out of sight from the public and very much out of mind.

According to the ADOC, Givens began her career with ADOC in 1993 as a correctional officer at Limestone Correctional Facility in Harvest.

During her time with ADOC, Givens rose through the ranks earning promotions to sergeant, lieutenant, captain and then to warden in 2016.

Deputy Commissioner for Women’s Services Wendy Williams said, “Warden Givens is a proven leader and her many years of experience and training has prepared her to oversee the daily operations of the work release center,”, “I know she will bring to the position the highest level of leadership and professionalism expected of her.”

Prior to this appointment, Givens was serving as assistant warden at the Julia Tutwiler Prison for Women in Wetumpka.

The Montgomery Women’s Facility warehouses approximately 300 inmates in a metal building with no air conditioning. Custody levels range from Medium, down to the lowest, which when obtained enables inmates to be able to go to work. Once working, ADOC charges them daily for the van rides to and from their place of work, it charges for having their uniform and bedding cleaned in the facilities laundry, and they take approximately 40% of any pay check of course, fines and restitution are also deducted.

Montgomery Women’s Facility and is one of Alabama’s three facilities that hold women. ADOC’s sugarcoated description of the facility reads: Inmates who are nearing the end of their sentence, or parole date, can prepare for their transition back into the community by obtaining paid employment before their release.

Most inmates work menial jobs and earn no more than a couple of dollars per day.

The Alabama Department of Corrections is in the midst of an ongoing staffing crisis, with a critical shortage of corrections officers with an overall staffing level of around 53 percent, in one of the most neglected and over crowded and therefore most dangerous prison systems in the entire United States.

It is widely accepted that women commit crimes for very different reasons than men do. In the Alabama prison system, male inmates outnumber women inmates by a ratio of approximately 12-1 and it is statistically accurate to say that women are far less likely to re-offend upon release, even the so called women violent offenders.

It would therefore be prudent for ADOC and The Alabama board of Pardons and Paroles to work together to hasten the release of these women that have already served substantial sentences of incarceration, especially those women that have an unblemished institutional record, that have stayed drug free and turned themselves around with very little if any rehabilitative instruction from ADOC and that deserve a second chance of leading a productive life without any increased risk to the public.

This reduction in female inmates would greatly help in alleviating some of the pressure on an over burdened, abusive, politicised and dangerous system that is being investigated state wide by the Department of Justice and subject to several ongoing lawsuits by the Southern Poverty Law Centre, the Equal Justice Initiative amongst others.

Several inmates that we’ve spoken to have expressed disbelief at the appointment of Warden Givens, Let us know what you think in the comments section below.