In my entire life, i can count myself fortunate in the aspect that i’ve never had to go to bed hungry, never had to live in filth with roaches and rats, never had to know the humiliating sting of purposefully degrading comments from someone who is supposed to be here for my protection. That all changed the moment i entered the Alabama Department Of Corrections, unprofessional, racist and ineffective custody. Where to start?

At over 200% capacity, the existing facilities to house ADOC (Alabama Department Of Corrections) inmates are derelict, unsanitary, ineffective and quite frankly dangerous. Julia Tutwiler prison is almost a century old and built to house no more than 400 inmates. ADOC shows no concern for their inmates safety, nor that of their officers or the surrounding publics by cramming over three times the intended maximum capacity in an 80+ year old building that should be condemned.

Montgomery Women’s Facility is no better. Currently MWF (Montgomery Women’s Facility) is a level II Camp designed to hold 150 work release inmates. Double the number of inmates & you’ll have current MWF count, with less than 40 actively working & exercising their custody. At the time this letter is being written, MWF has no warden & the officers are taking full advantage of that fact. They have no one to answer to and unprofessional conduct, retaliation for previous slights and racially motivated incidents run amok.

Take for instance, two inmates were caught smoking in the dormitory bathroom. One Caucasian, one African – American. The officer, also African – American, took both ID’s to write them disciplinaries. The officer was observed giving the black inmate her ID back, winking at her and saying “You got lucky”. The Caucasian inmate was written up, served and found guilty. She received 30 days loss of telephone, visitation and canteen privileges along with 30 days extra duty, which is acceptable, because she broke the rules HOWEVER did being black absolve the other inmate from her rightful punishment? Apparently in ADOC’s black & white world, it sure does!

Living conditions within ADOC’s prisons are deplorable and bring one to mind of a third-world country. It’s no secret at all & has been known for years. At Montgomery Women’s Facility, its not uncommon for the water to be turned off and the inmates have to use the facilities, on top of other inmates urine, bloody tampons, and defecation, while flies land all over you, because you can’t flush, nor wash your hands.

Another commonality? Brown, rust colored bathing, drinking & cooking water. Temperature in the dormitory during the summer months reach up to 103°f with a heat index of 112°f. Inmates & officers alike are no strangers to fainting from the heat. I feel its only a matter of time before someone dies from it. Even dogs who are to be euthanized have AC. What gives? Are we no longer to be considered human because of our mistake that led us here? 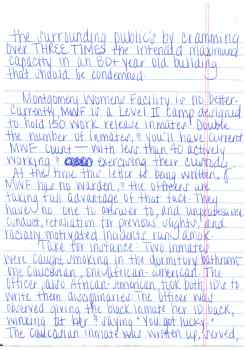 Healthcare with Alabama Department Of Corrections penal system is a joke. Inmates laughingly refer to the unit as “Death Care”, but sadly the joke is on us because its true. Oftentimes, inmates who were previously in the healthcare field, are who other inmates go to in emergencies because either HCU nurses are clueless as to what to do so they think an inmate is “overreacting”. Serious illnesses & injuries go untreated because providers cannot be reached.

More inside accounts to come from this girl! We’re fed up with being treated like cattle at a slaughterhouse.

Transcribed by admin from a statement by Inmate Bee.